Over the break between semesters at Beeson Divinity School, I’m reviewing Bruce Waltke’s The Dance Between God and Humanity: Reading the Bible Today as the People of God and Philip Goodwin’s Translating the English Bible: From Relevance to Deconstruction for Liverpool Hope University’s Theological Book Review. 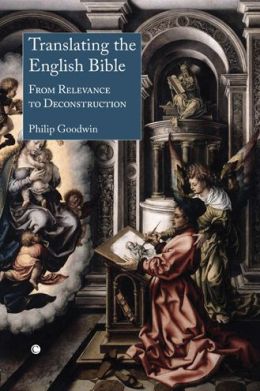 I’ve just finished the latter, and hope to write my review in the next day or two. However, I’d like to share the following quotes on Deconstructive Literalism and The Perfect Translation, because I find the concepts intriguing as a student of Eugene Nida’s dynamic or functional equivalence (when it comes to both NT Greek and modern Spanish), and a newcomer to relevance theory, which Goodwin uses to provide a way forward in the shadow of the KJV tradition. More on that later. In the meantime:

“What Aichele has noticed is that if the interpreter wants to ‘see’ the source text, he or she would prefer not to have another interpreter standing in the way. The problem with a dynamic equivalence translation, then, is that it does not permit deconstruction of the source text. The translation represents an ideological undertaking which itself can be readily deconstructed, but does not provide access to the source. (207-8).

“Now, of course Ryken and Collins, whilst advocating concordant translation on the one hand, also desire, on the other hand, to maintain the control over meaning to which Aichele refers, by implicitly linking concordance to thematics. In other words, concordance is seen as desirable because it reinforces the theme (‘the message’, again) of the text, to which it is seen as a servant. They leave unexamined the question of what to do when the phenomenon of concordance might be turned against thematics, to undermine it — to deconstruct it. One man’s exegesis is, however, another’s deconstruction. A concordant translation of a text might serve equally to reveal Aichele’s ‘defects and problems’ or Ryken’s ‘full exegetical potential’ — to reinforce its ‘intention’, or to undermine it. I will argue that it does both. (208).

“The perfect translation is the one whose relationship to a source text is such that it permits both the construction of the releveant interpretation of that text, and its deconstruction.” (209).

View all of Joshua Steele's posts.

This site uses Akismet to reduce spam. Learn how your comment data is processed.