You see, James started off as a mere fisherman. An admirable one, to be sure, because he and his brother John answered Jesus’ call in Mark 1. They left behind their father, their family, and – they grew to hope! – their family’s fishing profession.

James was off on a new adventure, hopeful and headstrong. So much so that, along with his brother John, he earned the nickname “Son of Thunder”! Coming from the Son of Man, that’s no small compliment!

But their headstrong passion proved to be a weakness as well. In Luke 9, after getting rejected in Samaria, the Sons of Thunder offer to call fire down from heaven to consume the Samaritan village! This earns them a stern rebuke from Jesus.

And, even more famously, they approached Jesus with the following request in Mark 10:37:

Now, their request is, in effect: “O King Jesus, would you please make us princes?”

And, granted, this is Apocryphal, but I imagine Jesus putting his arms around them and saying the following:

“Princes? Princes?! Boys, if I had wanted princes, I would have called princes! But, I don’t need princes!

No, no, no. What I need are new fishermen! And that’s why I’ve called you!”

You see, James had been hoping for a new position. And instead he received his old profession – transformed!

James was no longer to be a mere fisherman, but a fisher of men.

And not even just a fisher of men like Jeremiah 16 spoke of – for there the fishermen and hunters are instruments of judgment and exile.

No! Instead, James was to go fishing with, go fishing for Jesus, to bring people back from exile.

Now, undoubtedly, this is a step up from fishing for literal fish.

Not necessarily. At least, not in the world’s eyes.

The Death of St. James the Apostle

Jesus said to them, “You do not know what you are asking. Are you able to drink the cup that I drink, or to be baptized with the baptism with which I am baptized?”

And Jesus said to them, “The cup that I drink you will drink, and with the baptism with which I am baptized, you will be baptized, but to sit at my right hand or at my left is not mine to grant, but it is for those for whom it has been prepared.”

Now, granted, this isn’t one of the assigned lectionary passages for today, but I’d like us to look at the beginning of Acts 12:

About that time Herod the king laid violent hands on some who belonged to the church. He killed James the brother of John with the sword, and when he saw that it pleased the Jews, he proceeded to arrest Peter also.

Swept aside, in just one verse! I doubt that sort of an abrupt, violent end awaited most of the fishermen working for Zebedee’s family business.

Was it worth it?

Was it worth it? Did James receive any sort of a promotion, after all?

Of course, we know the right answer. But do we live it out?

Are we thankful, are we satisfied with our roles as servants within Christ’s Church? 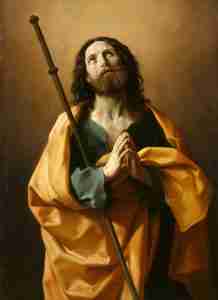 By God’s grace, may we – with the Apostle James – be able to confess the final words of Psalm 34 with open eyes, and open hearts. Perhaps it will help to imagine the following words on the dying Apostle’s lips:

View all of Joshua Steele's posts.

This site uses Akismet to reduce spam. Learn how your comment data is processed.