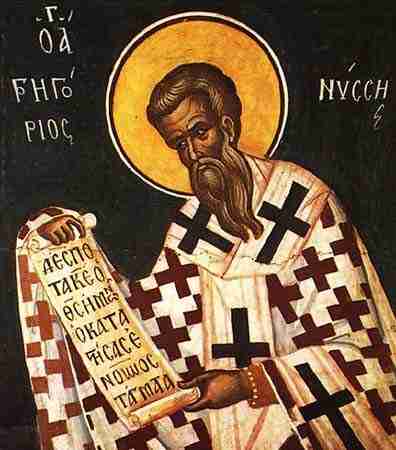 Gregory of Nyssa (c. 330–395) was the younger brother of Basil of Caesarea, and one of the three great Cappadocian Fathers. He passionately defended the Nicene concept of the Holy Trinity. Before he became bishop of Nyssa, he was a solitary ascetic who had also spent time as a rhetorician. He became bishop at Basil’s urging, but was temporarily exiled under the Arian emperor Valens. The “Nicene” emperor Theodosius restored him in 380, and commissioned him to propagate Nicene orthodoxy. His original and creative works included On “Not Three Gods,” On the Trinity, On the Holy Spirit, and Against Eunomius. He insisted that “three,” when applied to the Trinity, was not a numerical term. He also argued that every act of creation and redemption is performed cojointly by the Father, the Son, and the Holy Spirit. In Christology he famously used the term Theotokos to urge that Jesus was truly human, not to suggest a special status for the Virgin Mary. (Anthony C. Thiselton, “Gregory of Nyssa,” The Thiselton Companion to Christian Theology [Grand Rapids, MI; Cambridge, U.K.: William B. Eerdmans Publishing Company, 2015], 394–395).

Gregory is more faithful to the orthodox tradition than Origen, yet he clearly teaches *universalism, a redemption and restoration of the whole creation (including the devil). Those not purified in this life will be purified by fire after death. Gregory’s originality is seen particularly in his doctrine of the *atonement and of the *Eucharist. He explains the atonement in terms of the paying of the ransom (the life of Christ) to Satan (see *Redemption), who took it ‘like a greedy fish’ swallowing ‘bait’, not realizing that the Godhead was concealed within the flesh ‘like a fishhook’. This grotesque imagery, together with any idea of a ransom being paid to the devil, has generally been rejected by the church. The merits of Gregory’s theory lay in its objective and cosmic view of the atonement and in the way in which he linked it to the divine attributes of goodness, power, justice and wisdom. His doctrine of the Eucharist arises from his understanding of the physical aspect of salvation in the *resurrection of the body. He taught that *salvation was communicated to the body through the Eucharist. The bread and wine became the elements of the body of Christ through the words of consecration, so that as we receive them our bodies share in divine immortality.
Gregory is also noted for his influential *mystical writings in which he traces three stages in the ascent of the soul from apatheia, freedom from passion, through gnōsis, mystical knowledge in which the senses are left behind, to theōria, the highest stage of contemplation in which (since a created soul cannot see God) one passes into the limitless ascent into the divine darkness. (T. A. Noble, “Gregory of Nyssa (c. 335–95),” ed. Martin Davie et al., New Dictionary of Theology: Historical and Systematic [London; Downers Grove, IL: Inter-Varsity Press; InterVarsity Press, 2016], 380).

On the Soul and Resurrection [OSR]

Here is a quote from OSR that seems to indicate Nyssen’s belief in apocatastasis.

That, said the Teacher, is my meaning; and also that the agony will be measured by the amount of evil there is in each individual. For it would not be reasonable to think that the man who has remained so long as we have supposed in evil known to be forbidden, and the man who has fallen only into moderate sins, should be tortured to the same amount in the judgment upon their vicious habit; but according to the quantity of material will be the longer or shorter time that that agonizing flame will be burning; that is, as long as there is fuel to feed it. In the case of the man who has acquired a heavy weight of material, the consuming fire must necessarily be very searching; but where that which the fire has to feed upon has spread less far, there the penetrating fierceness of the punishment is mitigated, so far as the subject itself, in the amount of its evil, is diminished. In any and every case evil must be removed out of existence, so that, as we said above, the absolutely non-existent should cease to be at all. Since it is not in its nature that evil should exist outside the will, does it not follow that when it shall be that every will rests in God, evil will be reduced to complete annihilation, owing to no receptacle being left for it? (NPNF 2.5, 451).

We certainly believe, both because of the prevailing opinion, and still more of Scripture teaching, that there exists another world of beings besides, divested of such bodies as ours are, who are opposed to that which is good and are capable of hurting the lives of men, having by an act of will lapsed from the nobler view, and by this revolt from goodness personified in themselves the contrary principle; and this world is what, some say, the Apostle adds to the number of the “things under the earth,” signifying in that passage that when evil shall have been some day annihilated in the long revolutions of the ages, nothing shall be left outside the world of goodness, but that even from those evil spirits4 shall rise in harmony the confession of Christ’s Lordship. (NPNF 2.5, 444)

Nevertheless passages have been adduced from Gregory’s writings in which the language of Scripture as to future punishment is used without any modification, or hint of this universal salvation. In the treatise, De Pauperibus Amandis, II. p. 240, he says of the last judgment that God will give to each his due; repose eternal to those who have exercised pity and a holy life; but the eternal punishment of fire for the harsh and unmerciful: and addressing the rich who have made a bad use of their riches, he says, ‘Who will extinguish the flames ready to devour you and engulf you? Who will stop the gnawings of a worm that never dies?’ Cf. also Orat. 3, de Beatitudinibus, I. p. 788: contra Usuarios, II. p. 233: though the hortatory character of these treatises makes them less important as witnesses. (William Moore and Henry Austin Wilson, “The Life and Writings of Gregory of Nyssa,” NPNF 2.5, 16).